Osaka is located in the center of Kinki region in the Midwest Japan covers the compact prefecture land area in Japan, but boasts of largest population and highest population density second only after the capital, Tokyo. Mountains surround three sides of the prefecture and the west faces the arc-shaped Osaka Bay. In the Osaka City the Osaka Castle with a five-layer donjon as its core, on a lawn park that stretches for about 60,000 square meters. During the cherry blossom season in the spring, this park is especially crowded with hanami (cherry blossom viewing) crowd. In contrast to Kita with Umeda as its core, Minami is an area with core cities Namba, a popular business, shopping place and Dotonbori with many restaurants on both sides of Dotonbori-gawa River.

The Shinkansen bullet train allows - among others - the Kyoto-Tokyo routes, Tokyo-Hiroshima route and since March 2015 Tokyo to Kanazawa.

JR trains: the former national railway company is now divided into regional entities, which each manage their own networks. If traveling in a single region, the Regional JR Pass is often the most economical alternative.

Private lines: they are extremely numerous in Japan and often offer a quality equivalent or better service than JR lines, often for a lower rate. Among the most prestigious are, for examples, the Hankyu train line that connects Kyoto and Osaka in just 45 minutes.

Top most attractive places to visit in Osaka:

Osaka Castle is Japanese castle in Chuo-ku, Osaka, Japan. The castle is one of Japan's most famous landmarks and it played a major role in the unification of Japan during the sixteenth century of the Azuchi-Momoyama period. Osaka Aquarium Kaiyukan is an aquarium located in the ward of Minato in Osaka, Japan, near Osaka Bay. It is one of the largest public aquariums in the world, and is a member of the Japanese Association of Zoos and Aquariums. Tsutenkaku owned by Tsutenkaku Kanko Co., Ltd. is a tower and well-known landmark of Osaka, Japan and advertises Hitachi. It is located in the Shinsekai district of Naniwa-ku, Osaka. Nakanoshima is a 3 km long and 50 hectares narrow sandbank in Kita-ku, Osaka city, Japan, that divides the Kyu-Yodo River into the Tosabori and Dojima rivers. Shitenno-ji is a Buddhist temple in Osaka, Japan. It is sometimes regarded as the first Buddhist and oldest officially administered temple in Japan, although the temple buildings have been rebuilt over the centuries. Nipponbashi is a shopping district of Naniwa Ward, Osaka, Japan. The area is centered along Sakaisuji Avenue, extending from the Ebisu-cho Interchange of the Hanshin Expressway in the south, to Nansan-dÅÂ ri in the north. Tempozan Ferris Wheel is located in Osaka, Japan, at Tempozan Harbor Village, next to Osaka Aquarium Kaiyukan, one of the largest aquariums in the world. The wheel has a height of 112.5 metres and diameter of 100 metres. Sumiyoshi taisha, also known as Sumiyoshi Grand Shrine, is a Shinto shrine in Sumiyoshi ward in the city of Osaka, Japan. It is the main shrine of all the Sumiyoshi shrines in Japan. 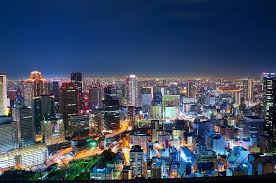 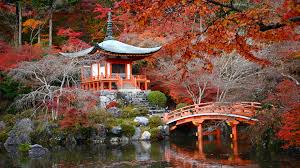 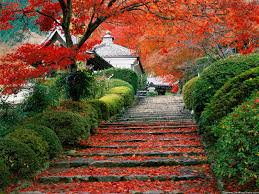